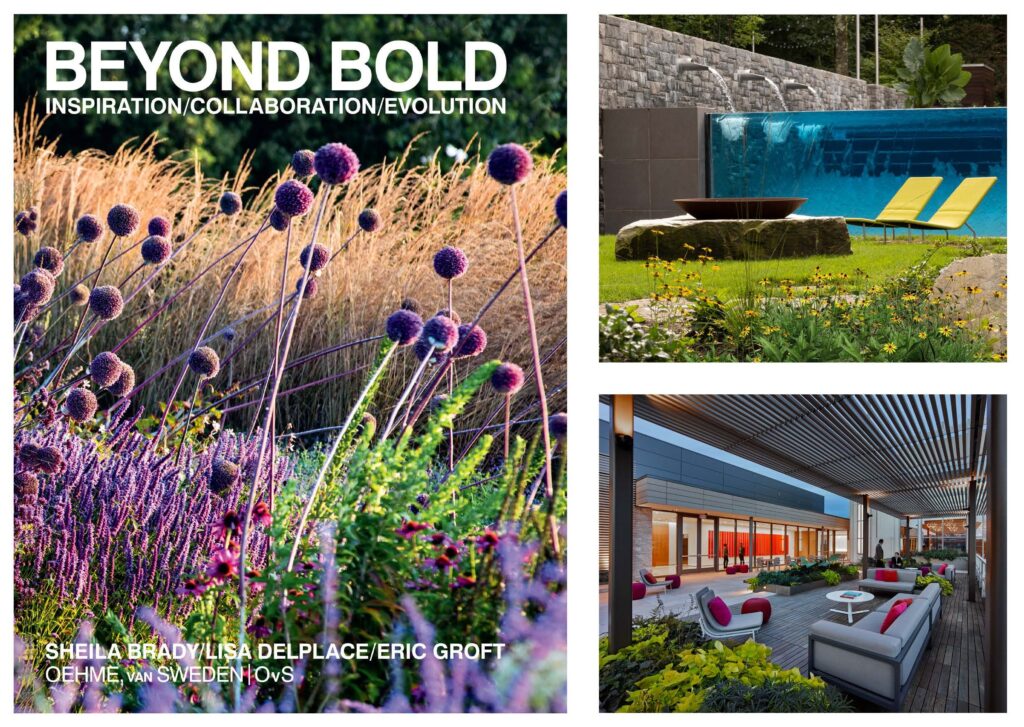 Beyond Bold: Inspiration/Collaboration/Evolution follows the Second Generation of leadership at OEHME, VAN SWEDEN | OvS, who has been creating extraordinary outdoor spaces for nearly 50 years. A tip-of-the-hat to OvS’ first book, Bold Romantic Gardens, Beyond Bold features 320 pages of vibrant photographs, detailed project plans, and first-hand commentary from firm Directors Sheila Brady, Lisa Delplace, and Eric Groft. The book is a unique record of the directors’ tenure with the firm, exploring the work that inspired them to join OvS, the designs on which they collaborated with the founding partners, and how they cultivated an individual style that is as legacy-driven as it is exploratory. From private gardens and pools to the expansive Tippet Rise Art Center in rural Montana to urban oases like Chicago Botanic Garden and New York Botanical Garden, the commissions featured in the book are masterpieces of both horticulture and hardscape. Beyond Bold, OvS’ sixth book, is an image-rich study of some of the most geographically and stylistically diverse works of landscape architecture by top players in the industry.

OEHME, VAN SWEDEN | OvS was founded in 1975 by Wolfgang Oehme and James van Sweden. Their partnership established a style known as the New American Garden, which celebrates the seasonal splendor of the American meadow while promoting its inherent ecological and sustainable values. Under the guidance of Sheila Brady, Lisa Delplace, and Eric Groft, the OvS style continues to evolve but remains driven by art, science, and emotional connections. In January 2022, Brady, Delplace, and Groft named a third generation of leadership. The qualifications, proficiency, and dexterity of the next generation will help guide OvS further into the 21st century and even further ‘beyond.’

Beyond Bold: Inspiration/Collaboration/Evolution will be officially released in October 2022. The book is available available for pre-purchase through our publisher, Pointed Leaf Press.