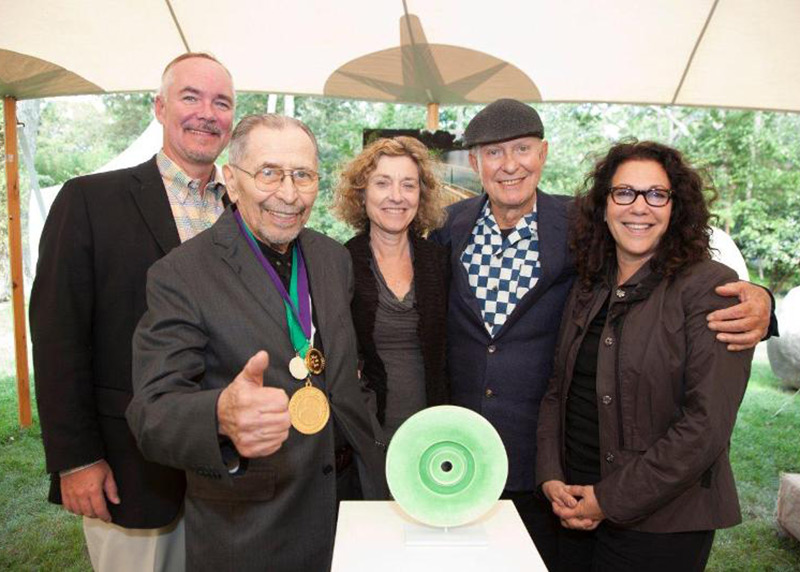 The award, given for the first time ever to a firm or group, celebrates the “powerful changes that OvS has consistently and continuously brought to the American landscape for the past five decades.” Prior recipients of the award include landscape architect Dan Kiley, American gardener and horticulturist Frank Cabot, and the founder of the Central Park Conservancy, Elizabeth Barlow Rogers.

Following tours of private gardens in East Hampton, a dinner at the home of Alex and Carole Rosenberg in Water Mill and a luncheon at LongHouse, OvS Principals Sheila Brady, Lisa Delplace, Eric Groft and Founding Partner Wolfgang Oehme accepted the award on behalf of the entire OvS team.

As part of the afternoon’s events, guests enjoyed a panel discussion between Oehme, van Sweden clients Kris Jarantoski, Executive Vice President and Director of the Chicago Botanic Garden and Todd Forrest, Vice President for Horticulture and Living Collections at the New York Botanical Garden. The panel was moderated by Elizabeth Barlow Rogers, President of the Foundation for Landscape Studies, and previous winner of the LongHouse Landscape Award.

LongHouse Reserve exemplifies living with art in all forms. It’s collections, gardens, sculpture and programs reflect world cultures and inspire a creative life.
LongHouse brings together art and nature, and aesthetics and spirit, with a strong conviction that the arts are central to living wholly and creatively. Dedicated to quality and integrity, LongHouse programs encourage a broad concept of learning.