Skip to content
Previous Next
ASLA Invests Eric D. Groft In The Council of Fellows

ASLA Invests Eric D. Groft In The Council of Fellows

On the evening of November 17, 2013, OvS Principal Eric D. Groft was invested in the American Society of Landscape Architects Council of Fellows. The Investiture Ceremony was held in Boston on the last evening of the yearly ASLA convention and was a black tie affair bringing together new Fellows with those who have received the award in past years. 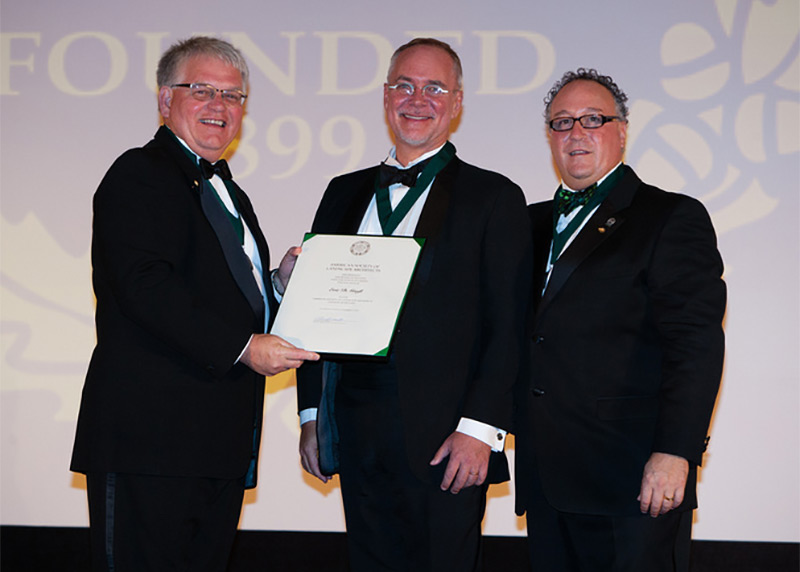 Escorted down the aisle by his business partner, Sheila Brady, FASLA, he received the traditional green beribboned medal worn by members of the Council. Announcing the names of the new Fellows was Susan Stamberg, the historic voice of NPR.

The designation of Fellow is among the highest honors the ASLA bestows on members and recognizes the contributions of these individuals over a sustained period of time to their profession and society at large based on four rubrics: Works of Landscape Architecture; Administrative Work; Knowledge; and Service to the Profession. There have been a total of 1,054 Fellows elected since the Society’s establishment in 1899. This year, over 4,000 members were nominated and just 33 were bestowed this honor. Membership in the ASLA Council of Fellows entitles recipients to use the highly regarded professional designation, “FASLA.”

Nominated by the Potomac Chapter, Eric was among ten nominees to receive the honor for works of landscape architecture. In conveying the honor, the Council noted that Eric’s significant portfolio of private and public projects “serves as testimony to the emergence of a sustainable, resilient landscape aesthetic.”
In attendance for the ceremony were OvS Principal Sheila Brady, FASLA, who was inducted as a Fellow in 2005, as well as OvS Principal Lisa Delplace, ASLA, and current and former OvS staff members Marisa Scalera, ASLA; Robert Johnson, ASLA; Lili Herrera; and John Knowlton, ASLA.

For Eric, Sheila, and Lisa, the evening was poignant as well as merry. They recalled a similar evening 20 years ago, when Founding Principal James van Sweden, who died in September, was invested in the Council of Fellows as member of the class of 1993.
Also in attendance were Charles Birnbaum, FASLA, FAAR, Founder and President of The Cultural Landscape Foundation; Jane Howland, whose father, National Park Service landscape architect and former UVA faculty member Ben Howland inspired Eric to become a landscape architect; Chris Schein, ASLA, President/Owner at Hord Coplan Macht; and Nancy Takahashi, Professor of Landscape Architecture at the University of Virginia. Last but not least, Eric’s youngest son Avery Groft was in attendance to watch his Father receive the honor.