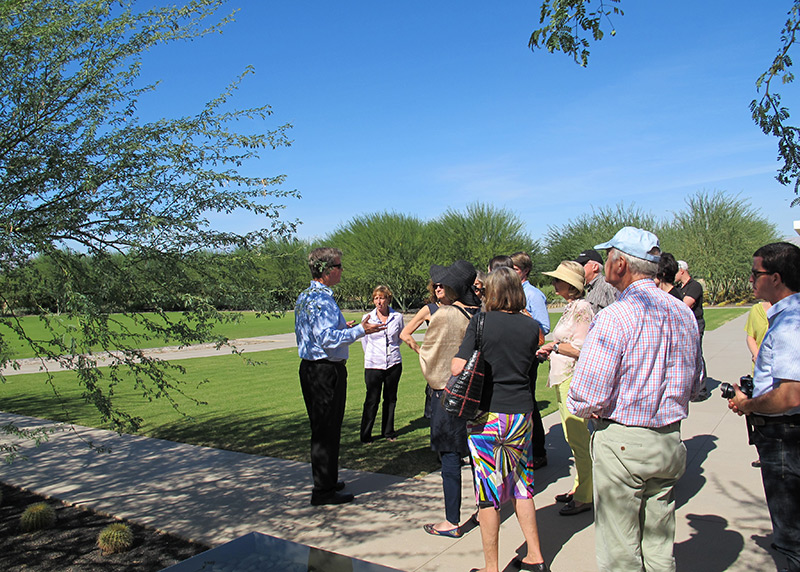 The meeting was held at the new Sunnylands Annenberg Center. Sunnylands is the 200-acre estate that was the West Coast home of Ambassador and Mrs. Walter H. Annenberg. Prior to her death in 2009, Mrs. Annenberg identified 15 additional acres adjacent to Sunnylands on which to construct a center and gardens for public programs. She commissioned Frederick Fisher and Partners to design the center and the Office of James Burnett to design the gardens. The nine-acre gardens now feature more than 50,000 low-water-use plants and include walking paths, a labyrinth, green lawn, and a natural wildflower area. Sunnylands Center and Gardens and the renovated historic estate are scheduled to open in early 2012, but the TCLF Board got a sneak peak during a walking tour led by landscape architect James Burnett.

The events of the weekend began on Friday evening, when Eric attended a book signing for Charlotte Freize’s new book Private Paradise: Contemporary American Gardens. Amongst the gardens featured in the book is Casa Luna, a garden designed by OvS on the Eastern Shore of Maryland. Cocktails and the book signing were held at the home of Marc Ware, a Palm Springs resident featured in the book, followed by dinner at Johannes.

Saturday started off early with a tour of the Kaufmann Desert House designed by Richard Neutra in 1946. The home was later restored by Marmol and Radziner, with material input and consulting by Albert Frey. The home’s original gardens were designed by Patricia and Chester “Cactus Slim” Moorten around 1949-1950 and have been updated a number of times over the years.

Later that day, the group enjoyed a tour of Elrod House, a John Lautner-designed five bedroom, five and a half bathroom residence commissioned by designer Arthur Elrod in 1968 and featured in the classic James Bond movie, “Diamonds Are Forever”, in 1971. The home’s 60 foot-wide circular living is surmounted by a conical dome that fans out in nine petals between nine clerestories angled up to bring in light. Retractable curved glass curtain walls open the entire living room and pool terrace to panoramic views of Mount San Jacinto, Mount San Gorgonio and the full sweep of the valley below and mountain ranges beyond. The very rock of the ridge is incorporated into the design throughout the home.

Saturday evening, Eric drove to San Diego for the ASLA Annual Meeting and Expo with Mario Nievera, Keith Leblanc and Dennis McGlade. The drive over the mountains at sunset was an inspiration! And as anyone could imagine, so was the company and conversation!